Hey everyone!  Welcome back for the second part to this story!

My first grade year was when things started showing up that something wasn’t going right with my little seven year old body. There was a marked increase in nausea and vomiting, I spent a lot of time in the bathroom and my weight gain started to slow.

This was when my family started seeking answers.  Let’s remember where we lived at the time.  Remember when I told you about Perryton, Texas – the town that didn’t have a Walmart?  Usually, towns of this size don’t retain a large population of specialty doctors.  We started at the local level with the doctor who brought me into this world. This was the same man who used some weird purple glue stuff to glue my ear back together when I smashed into a thing on the playground at school. This was the man, the legend, Dr. Mann – not even kidding.

He didn’t have much help for us. So, we went to several other general practice doctors around the area.  I remember one in particular that I went to with my mom and my grandma.  He gave us this huge bottle of milky yellow medicine.  I will never be able to tell you what it was, or why he gave it to us.  Believe me you can only retain so many things you’ve tried when you’ve been trying things since you were a tiny child.  But I do remember that it was gross – as all liquid medicine is.  My husband would disagree, but oh well.

Then we tried a GI (this is a term I will use a lot in this blog, so just for reference, this means Gastrointestinal) doctor in Amarillo, Texas, which was about a two hour drive from home in Perryton.  According to my historian (my dad) this visit didn’t get us anywhere either.

Let me back track a tiny bit to tell you a bit about my family life during these past couple of years that I’ve covered.  From the ages of five to seven, I lost three very close family members.  These were family members who lived close by and that I saw very often.  These family members were ones who were really involved in my life.

The first was my paternal grandfather, Grandpa Harry.  He died suddenly of a heart attack.   Then, my mom’s brother, Uncle Larry was killed in a tragic car accident.  There is no way for a car wreck to not be sudden, and it was very sudden and devastating. Then, my maternal grandmother, Grandma Margie died after years of battling with different health conditions.  Remember that when you are a kid, no one tells you about these kinds of things, so these losses were very sudden in my world.

All of this emotional trauma happening so quickly and in such a concentrated time led many doctors to believe that my tummy troubles were caused solely by the stress inflicted by all of it.  This sounds like a logical explanation when such events have happened and not to spoil anything, but this was not the case.  After several years of using this explanation, those doctors failed me and my condition only got worse and worse.

In my second grade year, there came more symptoms.  These are the grossest ones, in my opinion.  Gas and bloating is my least favorite part of my disease. It can really just make you feel like an actual whale potato.  That’s how it makes me feel anyway.  At this time, my weight gain seemed to come to a grinding halt at 62 pounds.  I continued to grow taller though. Keep in mind, growing up and not growing out can cause some issues. 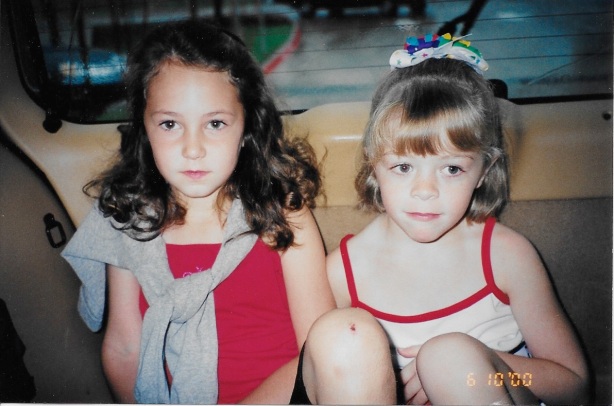 And not to undermine these things, what significant memories do I have from my second grade year?  My teacher died in a car accident.  Yeah, you read that right.  Halloween day, she was in an accident in heavy fog outside of Amarillo.  After about a week of waiting to hear the good news that she would be coming back to school, we instead received the news that Mrs. Taylor had died.  I can remember it so vividly, it hurts – our GT teacher told us the news dressed in her tube of LifeSavers costume.  Adding the loss to the stress of changing teachers after only two months of school was a lot.  It was a lot on the whole little town of Perryton, Texas.  And it just egged on the, “Lauren just has stress that is causing her tummy to hurt” diagnosis.

My third grade year was one of my least favorite years of my whole life.  My family packed up our whole lives in Perryton, and headed to the town of McKinney.  It is still in Texas, but you’ve got to remember how big Texas is for a second.  It was about an 8 hour drive away move.  McKinney is at the northern most part of the Dallas – Ft. Worth area.  Honestly, I’m not trying to hate on it, but going from a small country town to McKinney was a drastic change.  The expectation to ‘keep up with the Joneses’ is one hundred and twenty nine percent real there and there is no escaping it.  The people there are very different coming from a super small town.

My family jumped right in.  We moved into a ginormous house.  We filled it with new fancy furniture.  We got the fancy Maltese dog.  We tried to keep up with the Joneses as hard as we could.

When it came to my new school, it was actually the best and most diverse economically and socially, which was great.  But there was some bullying that happened.  There was a girl in my school who was having people take some sort of “test” to be her friend.  Of course, I wanted to be friends with her and her friend group!  I wanted to be friends with everyone!  I still do to this day, honestly.  I didn’t make the cut though.  I wasn’t accepted into her friend group. It was devastating.  Kids are mean. Hell, kids and adults are mean, there’s nothing we can do about it.  I am truly only mentioning this to further explain the reason the doctor’s list of “reasons Lauren’s stomach problems are all because of stress and anxiety” was somewhat plausible with my surroundings.

To further this story, I vividly remember having a conversation with this individual, our classroom teacher and several of the girls in her friend group around the teacher’s desk.  I was mortified.  I don’t remember in the slightest what this conversation was about.  But I do remember I was shaking in my boots about it, whatever it was.  I wound up telling the teacher I wasn’t feeling well, she told me I was fine right before I fainted into her arms.  So there were physical symptoms of severe stress caused by this whole situation.  But definitely not the primary cause of any of it. Also, fainting at school is something I have way too much experience with and it was always just as terrible as every other time, ha!

All of this is not to say I didn’t have friends!  I met a friend who is still one of my closest friends!  I happened to move right down the street from a gal named Tiffany.  We lived in houses that had the exact same floor-plan, which seemed so freaking cool then.  Now, that sounds so freaking lame, ha!  It was pretty much friends at first sight.  We even had a sleep over the very first day we met!  And wore matching homemade t-shirts on the first day of third grade!  We also had a few other friends in the neighborhood.  So to say I was completely socially deprived in my new environment would be extremely false.

I know I’m listing a lot of the negative things about this move.  But there was one extremely positive thing that happened as a result of our move.  There was a significant jump in the quality of healthcare that was at our fingertips, which we will soon learn was very important for my quality of life.

I’ll stop here for today to keep these reads broken up and as light as possible! Thank you all for your support in the launch of this blog on Friday. It truly means so much to me, as this has been in the back of my mind for years now.  It feels so nice to finally be here making it happen!

I’m a 26 year old, vintage loving, wife, and puppy mama. I’ve lived my day to day on IV nutrition for the past 13 years due to a crazy booger of an illness called Chronic Intestinal Pseudo-Obstruction. I’m excited to share my life stories and tips of the IV nutrition trade with you! Thanks for coming along for the ride.
With love always,
Lauren